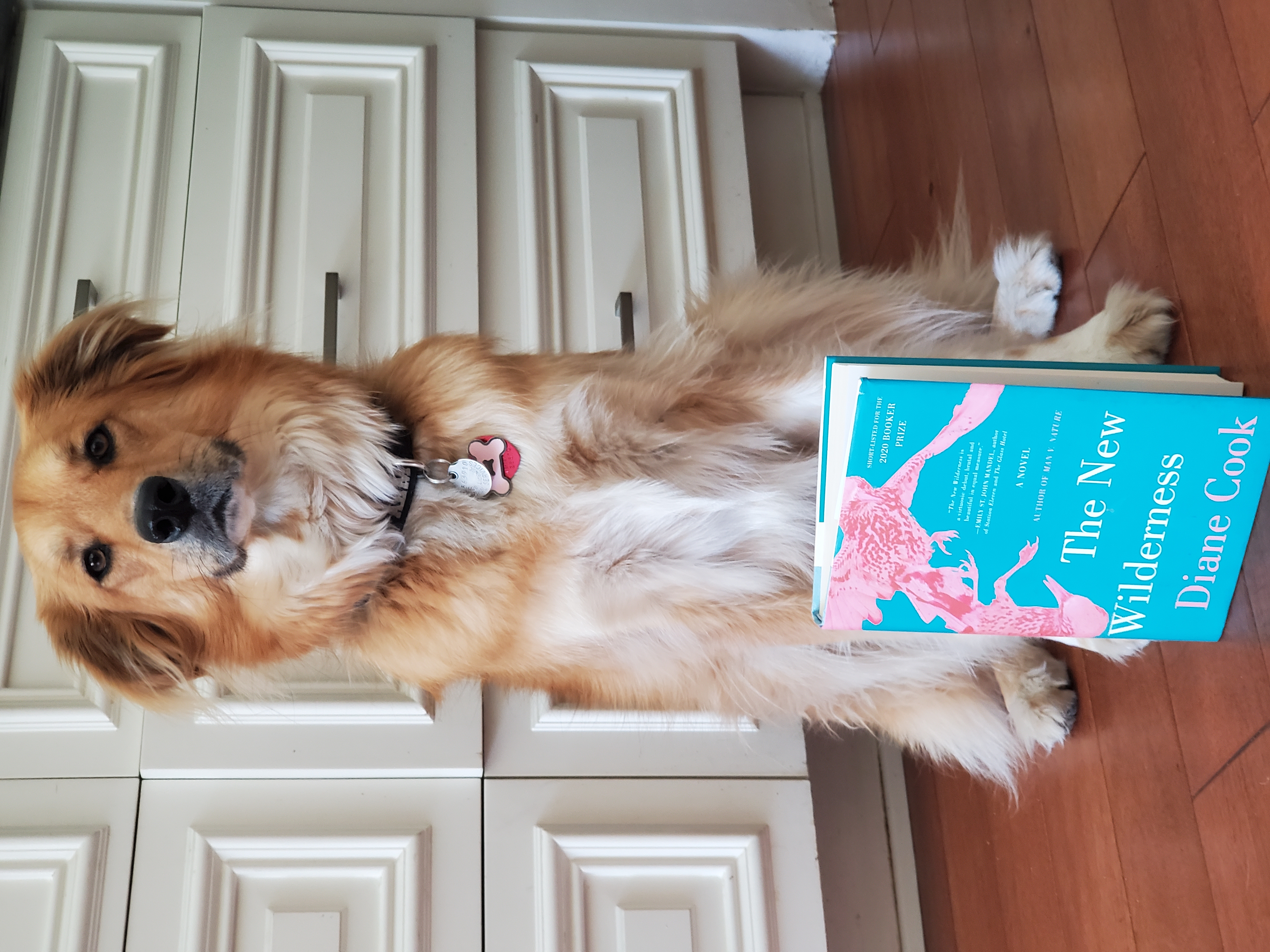 In my world, books photographed with my pup are the equivalent of giving a work of literature 6 out of 5 stars.

I read Diane Cook‘s The New Wilderness months ago. Yet I can not stop thinking about it. I’m not even entirely sure how to categorize it.

Is it literary fiction? Yes.

Is it a dystopian novel? Yes.

Is it an adventure novel? Yep, gotta check that box too.

Is it a family drama? Definitely yes.

It’s clear from the very first pages that the world The New Wilderness is set in is falling apart. There are very few trees left on earth and the air in The City (89% of America seems to be just one big city now) is growing toxic. Children are dying just from breathing. It’s in this setting that an academic, government funded experiment is embarked upon, the purpose of which is to find out what happens when you put a group of people in the middle of the only open parkland/wilderness left and leave them to it. The air in the wilderness is clean but the dangers are plentiful. Will they be able to survive off the land without destroying it? Will they be able to survive at all?

The answers to those questions are decidedly mixed.

The group that’s chosen is an interesting combination of personalities with relationships that veer between loving and toxic. At the center of the story are two, exceptionally well drawn characters, Bea and her young daughter Agnes.

The themes of the book are plentiful: What people do for the sake of survival, how communities are formed and held together, the complexities of sexual politics, how humans interact with nature. But for me the most compelling piece is the exploration of mother-daughter relationships.

Through the story of Agnes and Bea and Bea’s memories of her relationship with her mother and the history of Bea’s mother and her grandmother the reader gets to see how each generation of women expect to raise their daughters in ways similar to how they themselves were raised.

They can’t because the world keeps changing. Dramatically. Previously unthinkable lifestyle adjustments must be made. Each daughter ends up making choices that make perfect sense given the state of things and yet these are decisions that their mothers simply can’t reconcile themselves to. Furthermore, each daughter fully accepts their normal as, well, normal. They don’t miss the things their mothers long for because they don’t have any familiarity with those things. That disconnect greatly affects the mother-daughter bond.

And yet the bond we have with our mothers is, even when strained by ridiculously extreme circumstance, unbelievably powerful.

This is a book that will make you think. It will keep you engaged, often at the edge of your seat. Most of all, it will stay with you.

In other words, it’s so good it’s worthy of being photographed with my amazing and very discriminating puppy.